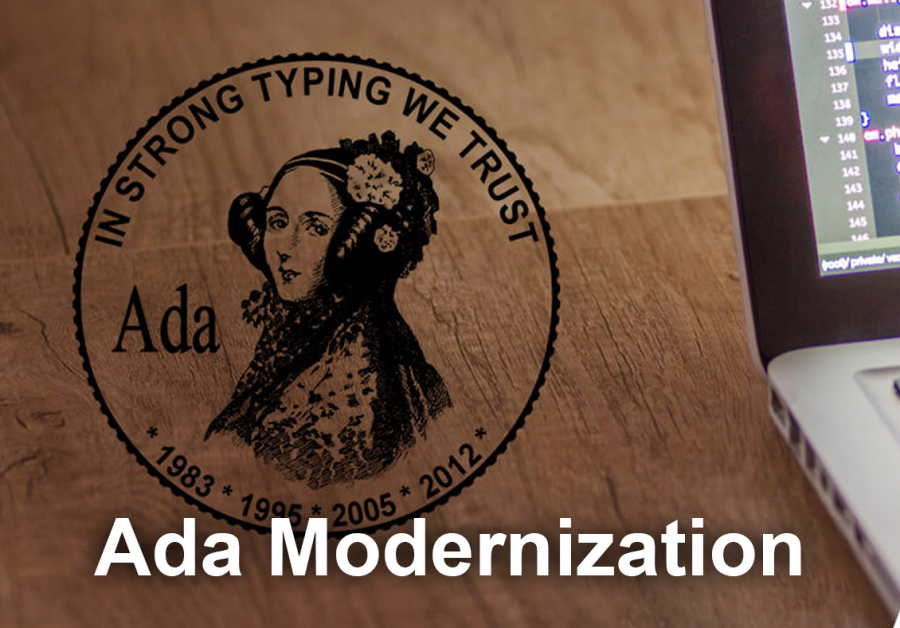 Ada was designed and released from 1977 to 1983 as a high-level object-oriented language for use in real time and embedded systems. It is used extensively in systems such as air traffic management systems, banking and financial systems, communication and navigational satellites, medical equipment, and in military applications. Currently, although the Ada language has been updated, it is not as common as it once was. The ratio of Java programmers to Ada programmers is now about 20 to 1.In addition to difficulties in integration with the prevalent C# and Java in most installations, Ada programmers are more difficult to find and command a higher salary. Maintenance is an ongoing task that can put a considerable strain on any program when skills are difficult to find.

TSRI’s fully automated modernization toolset, JANUS Studio®, has the ability to transform very large applications from legacy languages such as Ada to modern target languages such as Java, C++, and C# (depending on the customer preference). TSRI’s near 100% automated transformation technology can today ingest more than 32 legacy software languages, and produce native, uniform, object-oriented and human-readable target code in the client’s language-of-choice. TSRI’s JANUS Studio® toolset also transforms the underlying databases and user interfaces into multi-tiered modern environments, as well as documentation and re-factoring the modernized application using the same fully automated technology and model-driven approach.

While TSRI has a wide experience of over 200 critical code modernization projects, specific Ada projects include more than 20 large systems transformed into modernized target languages and architectures, with much of this work completed for government customers. Ada has a reputation for robust real time operation, and this adds special requirements to any transformation. The modernized code must not only perform identically to the original, but it must also be particularly robust and efficient. Extensive past work has enabled TSRI to develop substantial library support for Ada-specific items such as tasking and ranged types to aid in this transformation.

• Modernization of the Eurocat Air Traffic Management System (TopSky), now in use across over 19 European countries and Australia to track commercial aircraft in European air space. This project included transformation of Ada to both Java and C++ with substantial refactoring to improve performance and maintainability.

• Modernization of the Advanced Field Artillery Tactical Data System (AFATDS), including 5.1 million lines of Ada to Java, successfully completed in only 9 months.

• Modernization of the Joint Mission Planning System (JMPS) for the US Armed Forces, from Ada to C++.

• Modernization of 500,000 lines of Ada to C++ for the Navy’s P-3C Orion aircraft through a sole source contract based on our unique experience and maturity with the Ada language.

TSRI employs its proven JANUS Studio® toolset for all transformation projects. This begins with taking the source language provided by the customer, and parsing it into the JANUS Studio® to create an Abstract Syntax Tree Model (ASTM) of the legacy language, which is then transformed into an Intermediate Object Model (IOM) before being transformed into the final language. Use of this modeling format lets every code transformation take advantage of the hundreds of millions of previous lines of code that TSRI has transformed for other projects.

After code conversion is complete, JANUS Studio® transforms user interfaces and database schema to new targets such as webpages and relational databases. Finally, TSRI can use the JANUS Studio® toolset’s refactoring capability to perform both dead and redundant code elimination, as well as other specialized pattern-based refactoring according to the customer’s preference.

Code modernization is an essential part of the modern transformation of business. Old code will have numerous liabilities in integration and in remaining secure. Earlier languages such as Ada existed within a different environment at a different time. The languages themselves, the programming approaches, and the surrounding IT are all evolving even as the business environment is evolving. This means that programs accumulate technical debt, leading to ongoing inefficiency and maintenance costs, as well as complicating the conversion effort.

TSRI’s extensive experience in transforming Ada allows us to offer a comprehensive warranty on the transformation. In addition to offering a fixed price for almost all of the work on an Ada transformation project, TSRI will fix any errors due to transformation, for free, for up to 1 year following delivery of the compiling and linking modernized code.